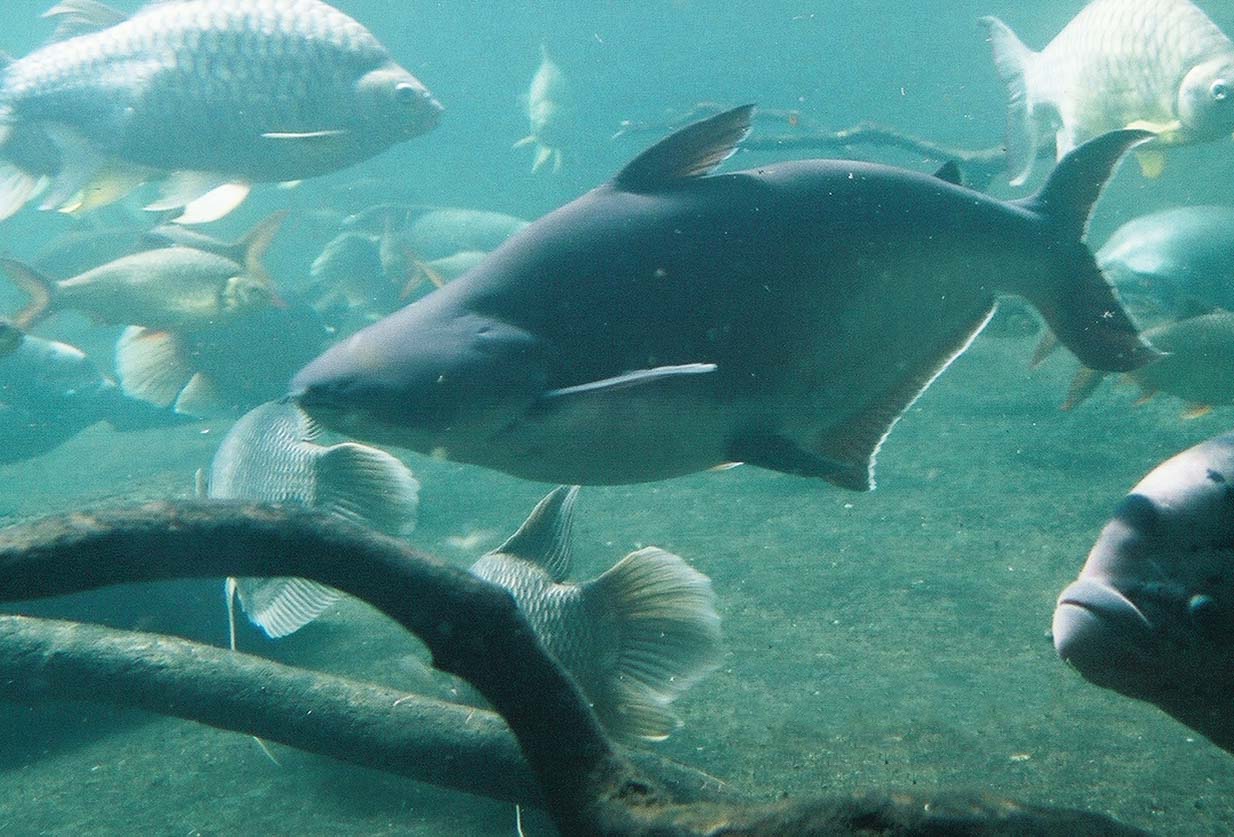 Irisdescent sharks, despite the misleading name, are actually a species of catfish. They are also known as Siamese Sharks and Sutchi Catfish.

This freshwater species is native to Southeast Asia and Thailand. They are also bred in captivity in Europe and the United States. It is usually for food when they are bred in captivity. They are generally found in rivers with sandy or rocky bottoms.

The Iridescent Shark is not recommended for beginner fish keepers. Although their needs are not very demanding, they are large and can be difficult to keep in captivity. You can find information below about their living needs.

Iridescent Sharks are likely one of the largest species you could find in a home aquarium. In the wild, they can grow to over 4 feet long and weigh about 100 pounds. In captivity, they are much smaller. But, you should still expect them to be at least about 20 inches to 3 feet long.

There are no real color variations in this species. But, you can still come across albino Iridescent Sharks. These are completely white and have red eyes. Because they are so rare, they are highly sought after and difficult to find.

Juveniles have a somewhat more interesting appearance than the adults. They still have a grey spectrum coloring. But, their colors are much brighter and shinier. They also have stripes on their sides that disappear in adulthood.

At any age, their head and eyes are large. They also have the barbels seen in many catfish species. Barbels are thick, fleshy protuberances that come from their heads. These can resemble whiskers, but they are thicker and sturdier.

It can be a little hard to tell the difference between males and females, since they look very similar. But, females tend to be larger and heavier than males. This is for reproductive purposes. Females also have lighter coloring.

The first thing to remember about Iridescent Sharks is that they need a lot of tank space. This is one of the main reasons why keeping them in a regular home aquarium is not recommended. Tanks for Iridescent Sharks should be at least 300 gallons. Larger tanks are preferable, though.

Juvenile Iridescent Sharks do not have the same tank space needs as adults. A little less than 100 gallons of water (at least 90) would suffice. But, you should transfer them into the larger adult tanks before they reach full size.

Tanks should have oblong (rounded) shapes. You can have decorations, but make sure the fish have plenty of free water space to swim.

This species can also be quite skittish. As they are very strong, it can be easy for them to break the glass if they panic and ram into it. Make sure the tank is very sturdy.

Because they are easy to startle, you should try to keep their tank in a quiet part of the house if possible. This will help to prevent any moments of panic and potential tank damage.

This behavior can also be quite scary to witness. Usually, the fish will begin to rush around the tank, hitting the sides. This often leads to injury even if the tank wall is not broken. But, unless it is a serious injury, they will generally heal soon after.

After one of their panic attacks, they will usually lie on the substrate for some time. Keep an eye on them to make sure they are still okay.

A pH level refers to the amount of acidity in the water. Water hardness is sometimes interchanged with the term “alkalinity”. This refers to the ability of the water to resist changes that would make the water more acidic.

dH is the measure of water hardness. This stands for “degrees of general hardness”. This is a measure of the dissolved calcium carbonate (mineral) in the water.

As well as water composition, you also need to be mindful of the equipment you use. You cannot have a tank with water only. It will not be enough to provide the enriching environment needed. Equipment needed for tanks include;

This equipment is useful for keeping the tank clean. You must have a powerful filter for an Iridescent Shark tank.

Iridescent Sharks need a moderate amount of light and water flow. LED lights are your best option, since they will not add any extra heat to the water. Uneven heat distribution or temperature changes can actually be damaging to the fish.

As with any species, you want to mimic their natural environment as much as possible. For Iridescent Sharks, you should have rocky or sandy substrate. This will resemble the rivers that they often live in.

Iridescent Sharks also enjoy a variety of large decorations, since they are quite shy. Tall plants, stone, logs, and other shelters are great options.

Keep in mind, though, that it is easy for their skin to get damaged. This species, unlike most others, does not have bony plates to protect them. They also have very poor eyesight.

So, make sure the decorations do not have sharp edges or rough surfaces. Rocky or sandy substrate can be coarse, but not enough so that it would damage the skin.

When you first start your tank, you should test the water with the test strips every 2-3 days. This tells you whether all equipment is working. It also indicates any changes you need to make in water chemistry.

Once you see that the water chemistry is being maintained, you can spread out the tests. You may want to begin by changing to weekly and then once every few weeks. At the very least, you need to test the water on a monthly basis and after every water change.

Iridescent Sharks are a hardy species. But, they do not respond well to changes in water parameters. They actually have several sensory organs to detect water changes. Water changes can be damaging to their health, so make sure you maintain the water chemistry.

Iridescent Sharks produce a large amount of organic waste. Because of this, they need more frequent water changes than other species. You may also need to change or clean the filter more often.

For this species, you should change 25-30% of the water on a weekly basis. You do not need to remove the fish during the water changes.

That said, remember that this species is easy to startle. Make sure you are gentle, quiet, and slow with the process. This will prevent them from having a panic attack that damages themselves or the tank.

Keep and eye on your equipment to make sure it functions. Do this by ensuring water flow, cleanliness, and chemistry. Tank equipment and accessories usually come with cleaning instructions. These instructions also tell you if you need certain tools to clean the equipment.

Iridescent Sharks are not picky eaters. They are omnivores, meaning that they eat both plants and animals. They do still need to have a lot of variety in their diet, though. This ensures a healthy immune system and helps to reduce stress.

At the most basic, you could decide to feed fish flakes or pellets to this species. This can be enough to cover most of their nutritional needs. But, it is still a good idea to mix in live feed as well for optimal nutrition.

Because of their poor eyesight, you need to be careful about feeding them pellets and flakes. Make sure they are large enough to see on the surface of the water. Sinking pellets are also a good idea for species with poor eyesight.

If you do decide to use feeder fish, make sure you keep them separate for a few days before feeding. This will help to ensure they do not carry any diseases as you should see the signs.

Vegetables are also a great addition to their diet. You can give them fresh or frozen, but fresh is preferable. Some recommendations include squash, cucumbers, and lettuce.

As juveniles, their diet will consist of live food for the most part. Adults have much more vegetarian based diets. They will also lose their teeth as they get older, making live food more difficult to eat.

Iridescent Sharks should have feedings 2-3 times per day. Their feedings usually do not last long. Any food you give them should be in portions that they can consume in under 5 minutes.

Make sure you clean out any leftover food since this can breed bacteria. Also adjust the feeding sizes if you notice that they are not finishing their meals.

Iridescent Sharks are a very hardy and healthy species compared to some others in home tanks. This species can live up to 20 years.

Iridescent Sharks do not have any diseases specific to their species. But, as stated above, they are vulnerable to some skin injuries and conditions.

The key to maintaining their health is maintaining water quality and proper diet. Drastic changes or deficits in these can trigger diseases and other conditions.

Every disease, illness, and injury has a unique appearance and set of symptoms. In general, look out for any unexplained or sudden changes that catch your attention. This includes changes in appearance, diet, and other behavior.

Among any aquarium species, the most common disease you will see is Ich. This is actually a type of parasite. You may also see a variety of bacterial and other types of diseases.

Diseases and injuries, along with their unique presentations, also have different treatments. Most often, this includes either water additives or medicated food. You should also quarantine sick fish if possible.

If you have questions or concerns, your best bet is to contact a veterinarian or other expert.

Iridescent Sharks do well with peaceful fish that are similar in size to themselves. With smaller fish, they can be very aggressive and are likely to eat them. Crustaceans are also not recommended as tank mates since they are likely to become a snack as well.

Small fish may be fine if they are dominant enough to protect themselves. But, it is still not recommended to house them with Iridescent Sharks. Even smaller aggressive fish can lead to fights causing injuries and stress.

Iridescent Sharks can be very shy and submissive, though. They are not likely to fight back if provoked by aggressive fish. Although there is no cause for concern with smaller fish, this may be an issue with larger fish. Because of this, medium or large aggressive species are not recommended as tank mates.

Iridescent Sharks are a schooling species. They need to be in groups of their own to reduce stress. Without groups, increased stress can have detrimental health effects.

Juveniles need to have larger schools than adults. Generally, as they get older, their need for large groups dissipates. At the least, adults should be in groups of at least 4-5.

Some recommendations in these categories include;

Large fisheries breed Iridescent Sharks in many different countries. But, these fisheries are commercial operations that breed them for food.

In the wild, Iridescent Sharks breed during the summer. This is when there is an increase in both water temperature and water levels.

Iridescent Sharks need a lot of space in their everyday lives. The space needed during breeding season increases further. The conditions and space needed are not available in home tanks.

Even if enough space was available, these fish travel to breed. In fact, without migrating, Iridescent Sharks will not even begin the breeding process. They will not register that it is time to breed and will not do so.

Now you should understand that housing an Iridescent Shark is a complex undertaking. Again, you should only look into this if you have experience with fish keeping and are serious about it.

You can use the above information to go forward with setting up a healthy living environment. Be sure to maintain tank conditions and nutrition. With these, you will have long lasting fish with visual appeal.