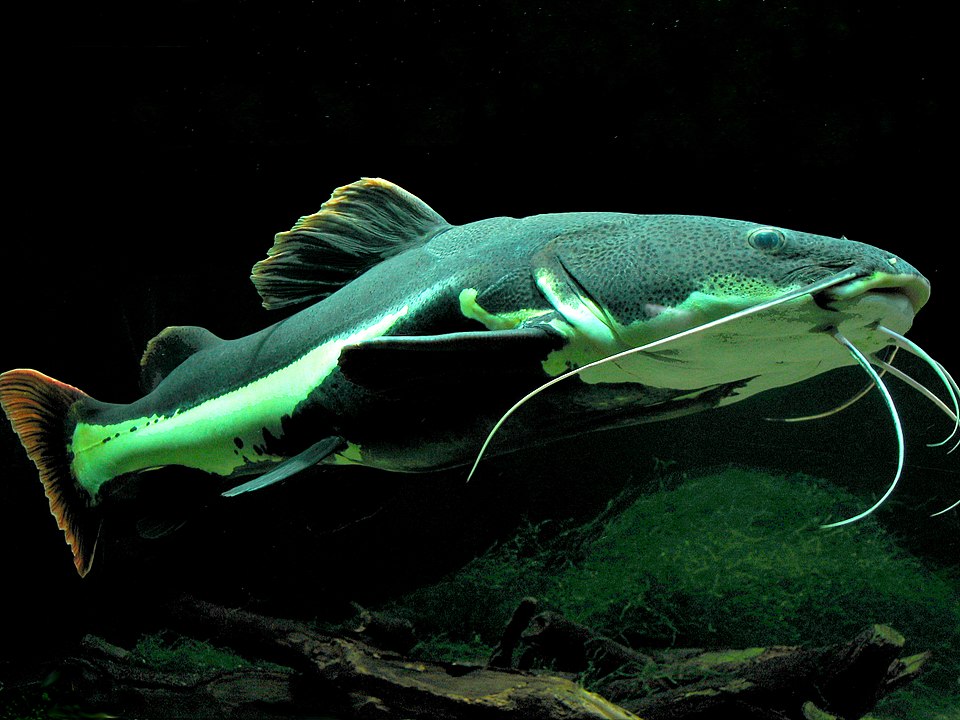 Redtail Catfish are perhaps some of the most unique aquarium fish on the market today. Beyond their iconic flat heads and whiskers they come in a wide range of colors and style, ranging from small and drab while others are massive and vibrant.

Some, like the pleco catfish, are bottom feeding algae eaters who will glide across the floor of their tank like an aquatic vacuum cleaner. Others, like the pictus are omnivores who will wolf down just about any plant or animal that they can get their mouths on.

Catfish are a diverse and exotic addition to any fish tank or aquarium. But among this fascinating group of fish one of the eye catching is the gigantic South American redtail catfish.

In the wild the redtail catfish lives near the bottom of freshwater rivers and lakes. There it hunts for food using its barbels use touch and smell to locate anything that it can get its mouth around. Redtails are largely nocturnal and are most active at night, spending their days hiding in dark spots away from predators. One quirk of redtail catfish behavior is that they will make clicking sounds to ward off predators in the water.

The redtail catfish is the only surviving member of the genus phractocephalus. The oldest phractocephalus fossils date back to the Miocene epoch which was 23 to 5.3 millions of years ago with a minimum age of 13.5 million. This means that phractocephalus are older than modern humans in terms of evolution.

Redtail catfish are a massive species which can grow up to 6 feet long and weigh over 180 pounds, making some of them larger than their human handlers. Their bodies are largely black with white stripes running down their sides and along their underbellies. The name redtail comes from the red and orange tips of their fins, specifically the top fins and tail.

Like most catfish the redtail has soft, smooth skin instead of scales and a broad, flat head. Both of these traits help them feed and dig into the bottom of riverbeds. The redtail also has catfish barbels which are fleshy whiskers that help the fish smell and feel in its environment. The redtail catfish has three pairs of barbels, one large pair on its upper jaw and two small pairs on its lower jaw.

A well-cared for redtail catfish can live to be up to 20 years old and grow incredibly quickly. If taken care of they will reach 1 foot in length in their first year. It should be noted that fish do not grow to the size of their tank and can easily outgrow a tank that is too small for them. If you plan on purchasing a redtail catfish be sure to plan ahead for their long life, massive size and high growth rate.

Due to their massive size and quick growth rate it is important to get a large tank for your redtail catfish early on. 1,000 gallons is the minimum tank size for a redtail catfish and even this may not be enough for a fully grown specimen. If you want to keep multiple redtails you will need a minimum 2,500 gallon tank. Redtails can also be kept in an indoor pond if a fish tank is not available.

In addition to swimming space the redtails will also need space to hide under. Large decorations such as logs, stones and thick plants will help with this. Redtails will eat anything they can fit into their mouths so make sure they cannot eat anything you put into the tank. It is best to not put anything in the bottom of the tank like rocks or gravel, but if you want the extra decoration a thin layer of sand should be safe.

Redtail catfish need a warm environment so the tank should be ideally heated to between 68 and 79 degrees Fahrenheit. They also enjoy a low light environment so keep as few lights on the tank as possible. Due to this warm, dark environment and the amount of waste they create it is important to keep your tank clean. Sump filters are the best option in this case given how big a redtail’s tank needs to be. Just make sure there is nothing on the filter that might break off and be eaten by the fish.

Redtail catfish are omnivores and not particularly picky about what they eat, swallowing almost anything they can fit in their mouths. This includes inedible parts of the tank such as stones, gravel, sticks and parts of tank filters as well as any other tank fish they can get into their mouths. For this reason it is important to carefully pick the decorations in your tank and avoid small tank mates for redtails.

Redtails in the wild are bottom feeders that suck small animals and plants off riverbeds, including crustaceans, worms and even fallen fruit. In a tank environment redtails will still eat anything given to them but in both cases they have a preference for meat. They can be fed easily with live food, frozen food or pellets.

Redtails should be fed every other day when they are young but as they mature they will only need to be fed about once per week. After feeding redtails become slow and sluggish in order to digest their food. A good indication of when they need to be fed is when they start getting active again, since that means they have fully digested their meal.

It is important to be careful when giving life food to any of your fish. Live feeder fish raised in poor conditions sometimes have little nutritional value. They can also carry diseases and parasites which are dangerous to aquarium fish. As a rule frozen foods offer more nutritional value and are safer.

Young redtail catfish are shy and will spend most of their time hiding so they will need stony caves or other decorations to hide in during the day. To help overcome this shyness you can put your tank somewhere you can regularly be seen so the redtail will become more comfortable around you. Overtime they will lose this shyness and can even be trained to perform tricks like eating out of your hand.

Adult redtail catfish are not shy at all and can be quite aggressive with other fish. They are territorial predators in the wild and will eat or kill any fish smaller and weaker than themselves. Redtails are more tolerant of large fish they cannot eat or easily bully, especially other redtails. Due to their massive size and strength redtail catfish can shatter aquarium tank walls so it is important to buy a tank made of Plexiglas or another strong material.

Redtail catfish are largely nocturnal and so are most active during the evening and at night. During the day they move very little and are sometimes motionless for long periods. They are also bottom feeders and will stick close to the bottom of the tank for the most part, sucking food off the floor of the tank.

Redtail catfish are shy when they are young and dangerous to other fish when they are older so it is best to keep them alone. Smaller aquarium fish like tetras and bettas will be quickly swallowed up by the redtail while larger fish might be attacked by the territorial catfish.

They can be kept with other redtail catfish but due to their size and tank requirements there are only so many redtail catfish someone can keep. When keeping redtails together they should all be around the same age since adult redtails might eat younger redtails accidentally or on purpose.

If you want to put tank mates in with your redtail catfish you should choose large or aggressive breeds such as gars, rays, arawana, and larger cichlids. Just like with other redtails it is important that any fish in the tank with your catfish are too large and aggressive to swallow, so plan ahead if you buy a small catfish since they grow quickly. A red tail catfish too small to eat its tank mates may be able to swallow them whole within a year.

Between their need for a massive tank, special tank environment, aggression towards other fish and tendency to eat anything they can get their mouths on, redtail catfish are not for novice fish enthusiasts. They may not be for intermediate level aquarium keepers either since a fully grown adult might need a tank of over 2,500 gallons to sustain.

But between their unique appearance and striking size makes them a beautiful addition to any aquarium or pond. If you can keep up with the redtail’s needs and keep it from eating anything else in the tank they can be remarkable exotic pets.